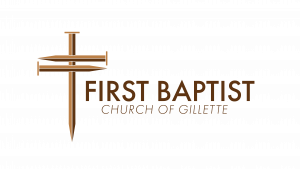 103 boxes were assembled after church on Sunday 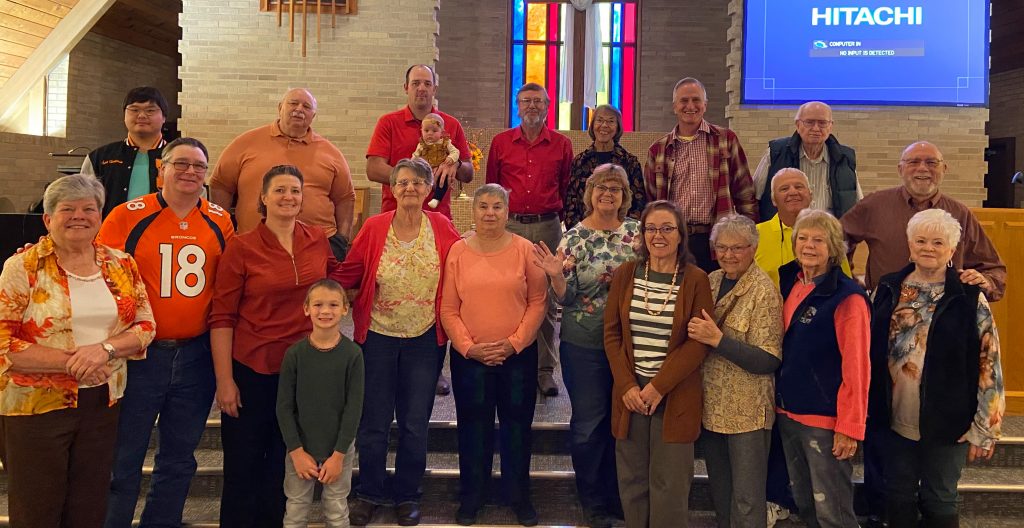 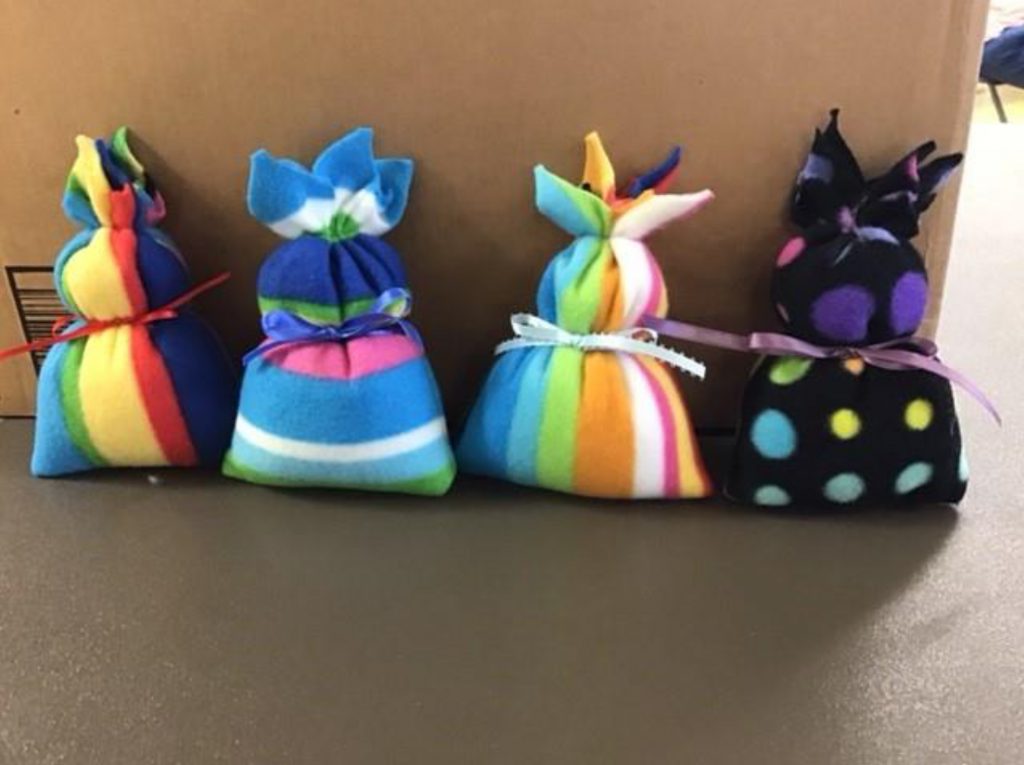 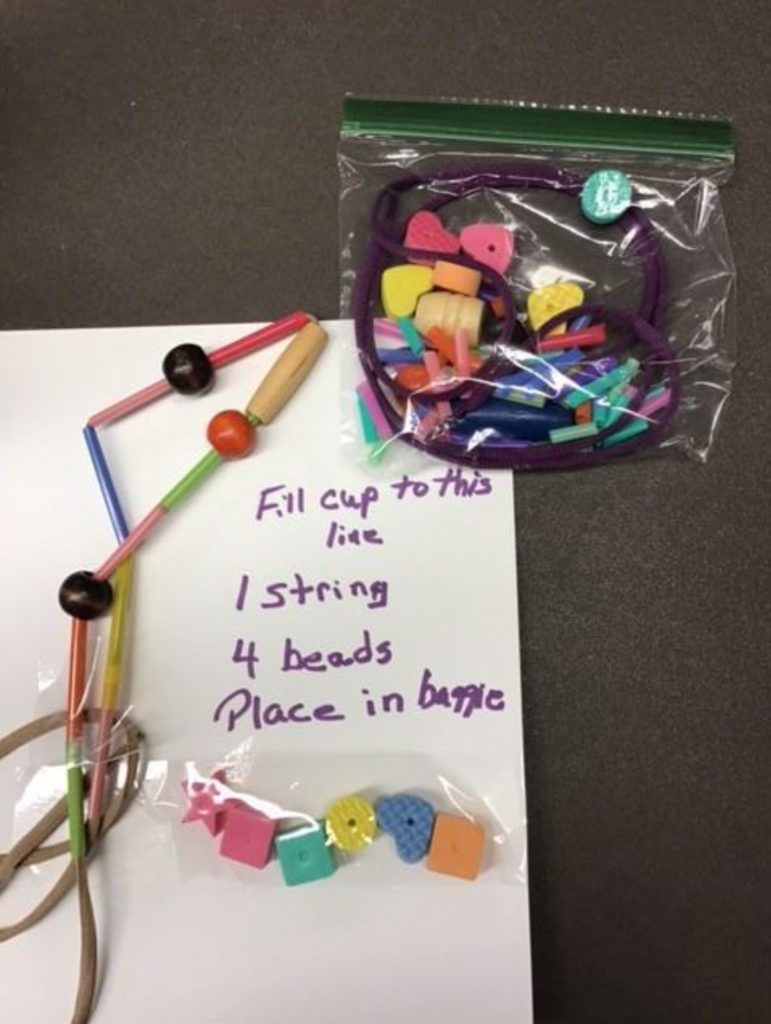 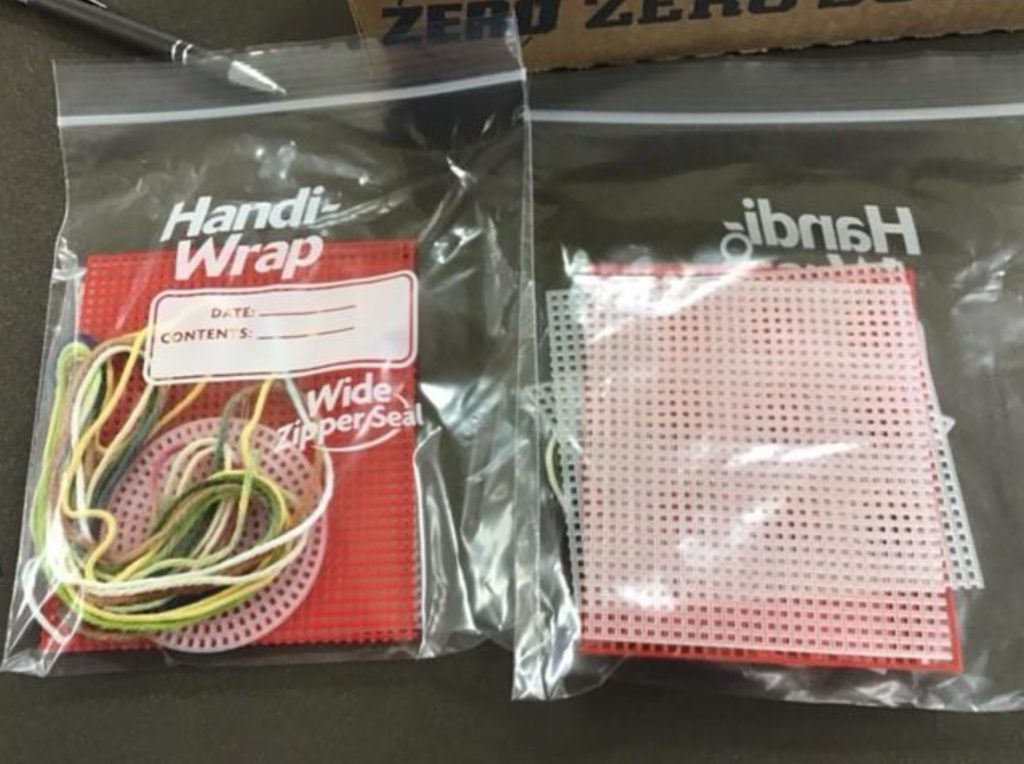 15 Balls, deflated and wrapped with pumps. 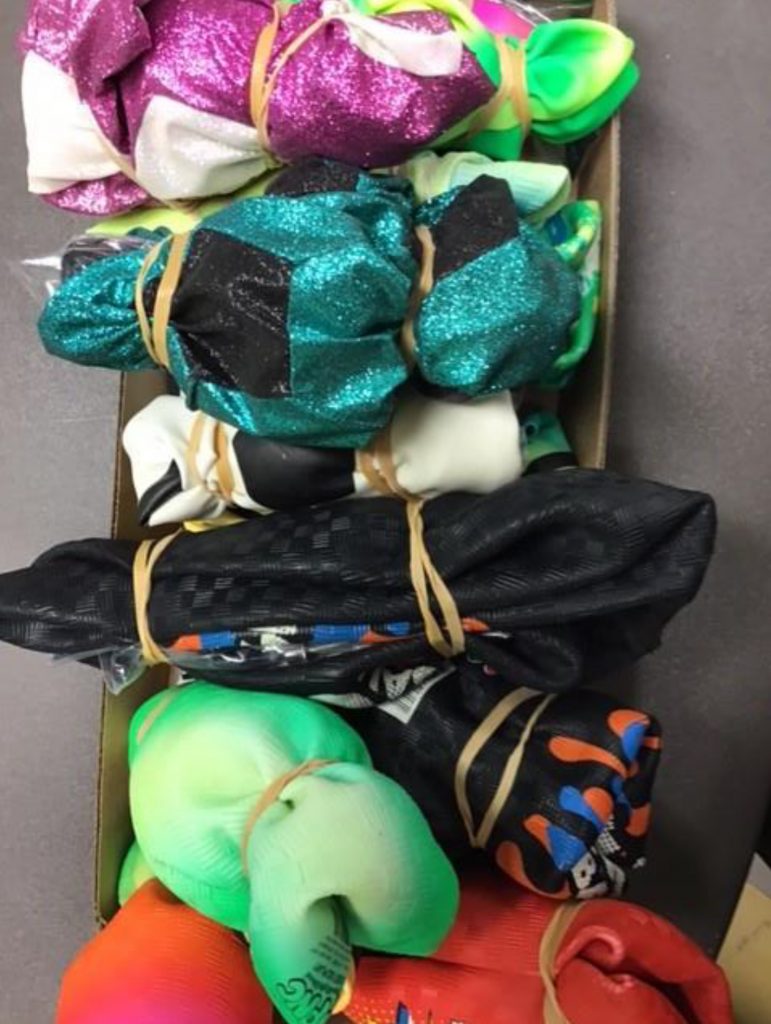 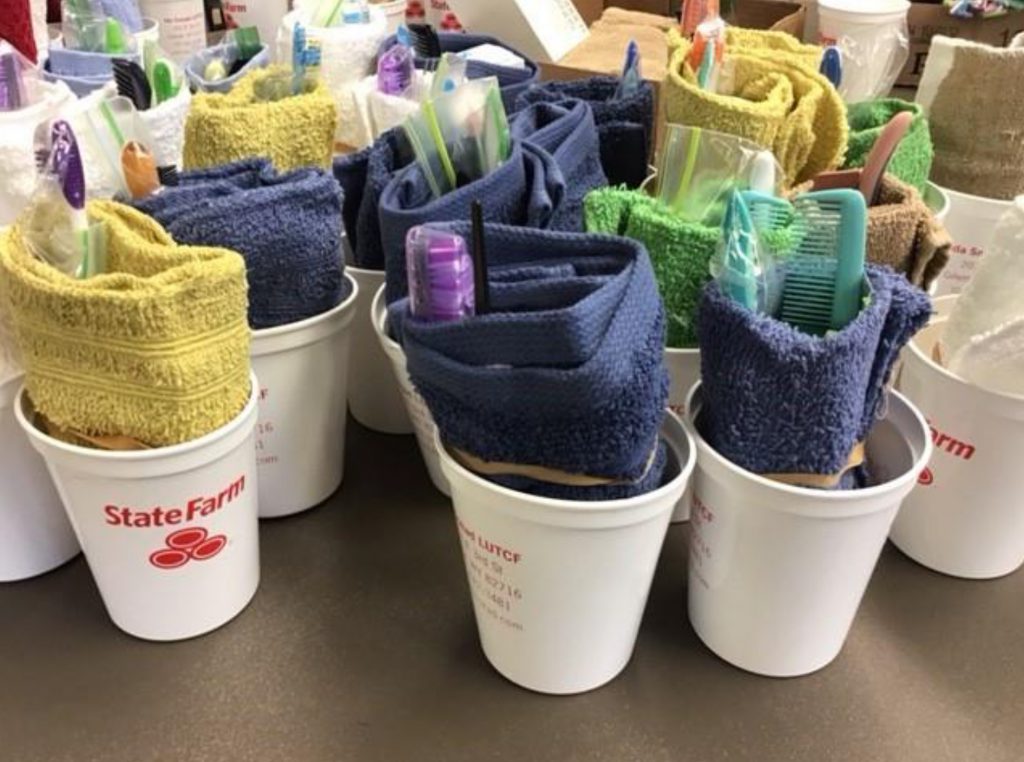 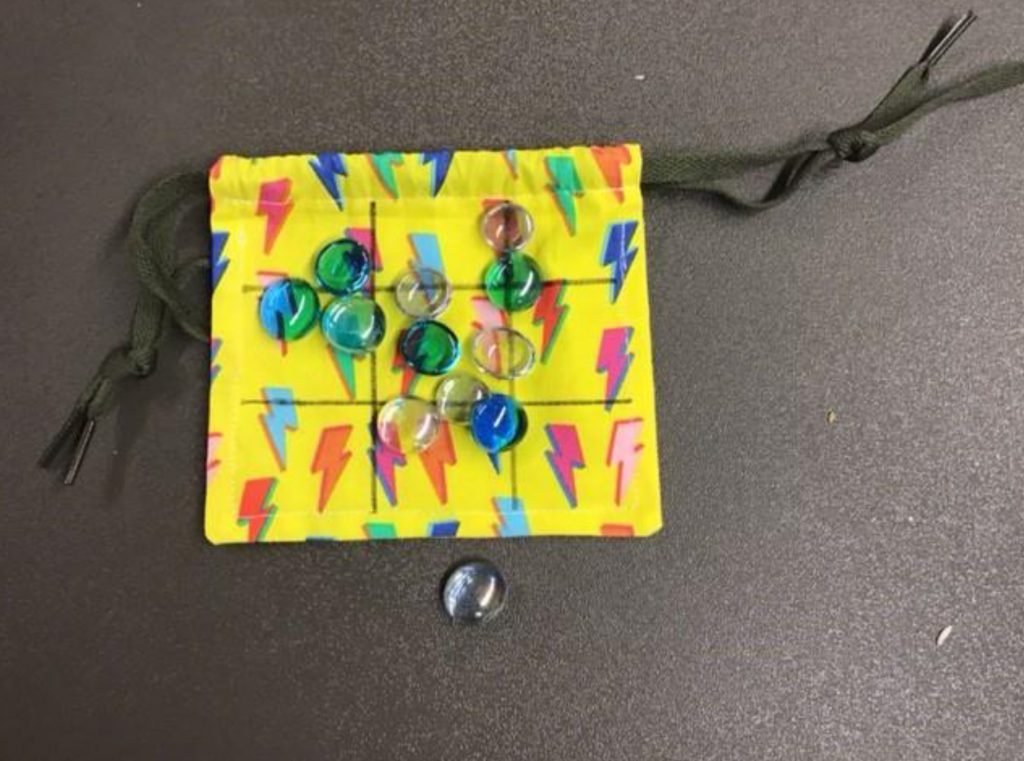 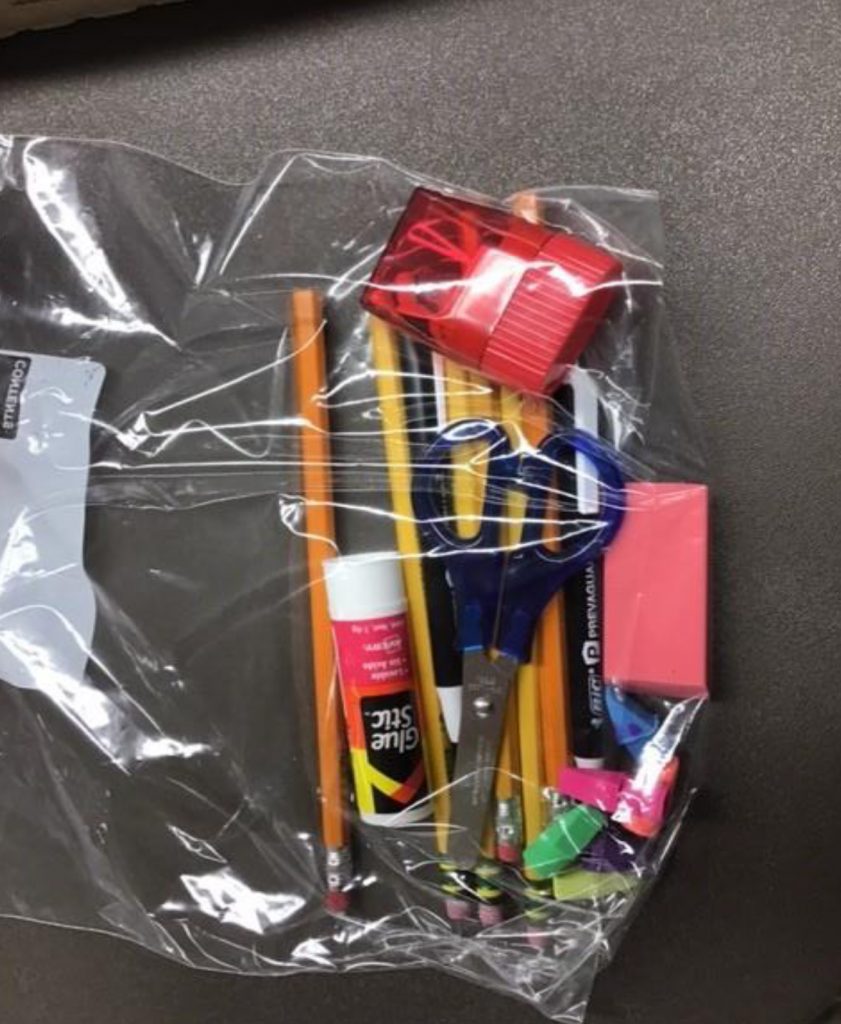 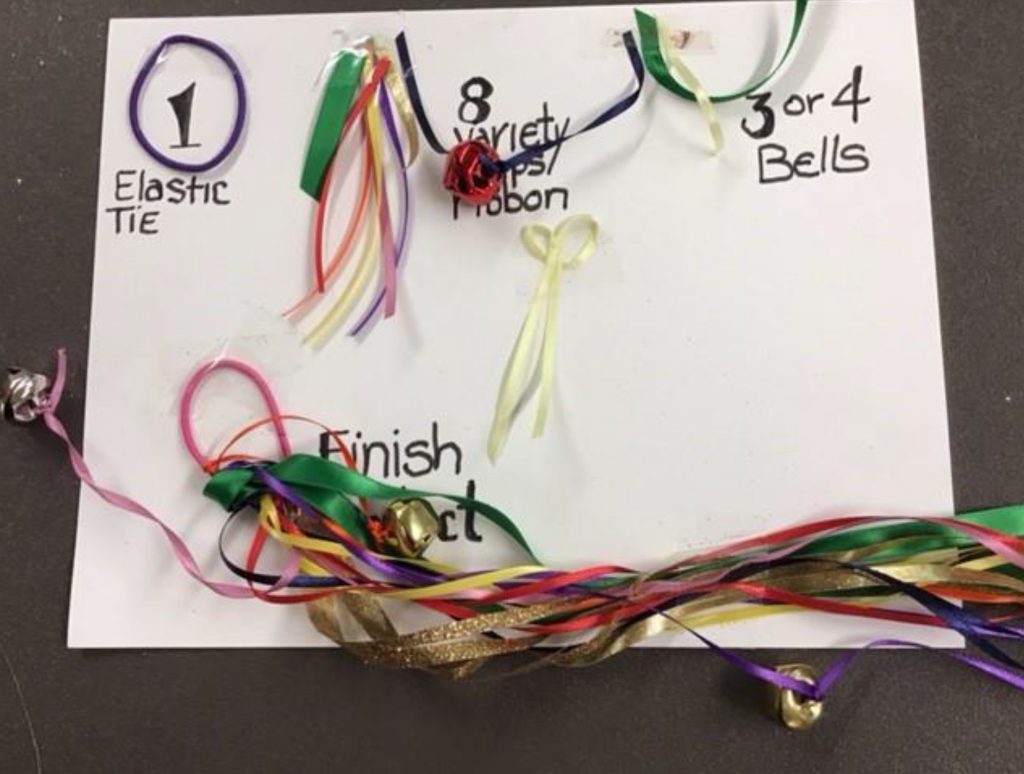 From your old t-shirts! 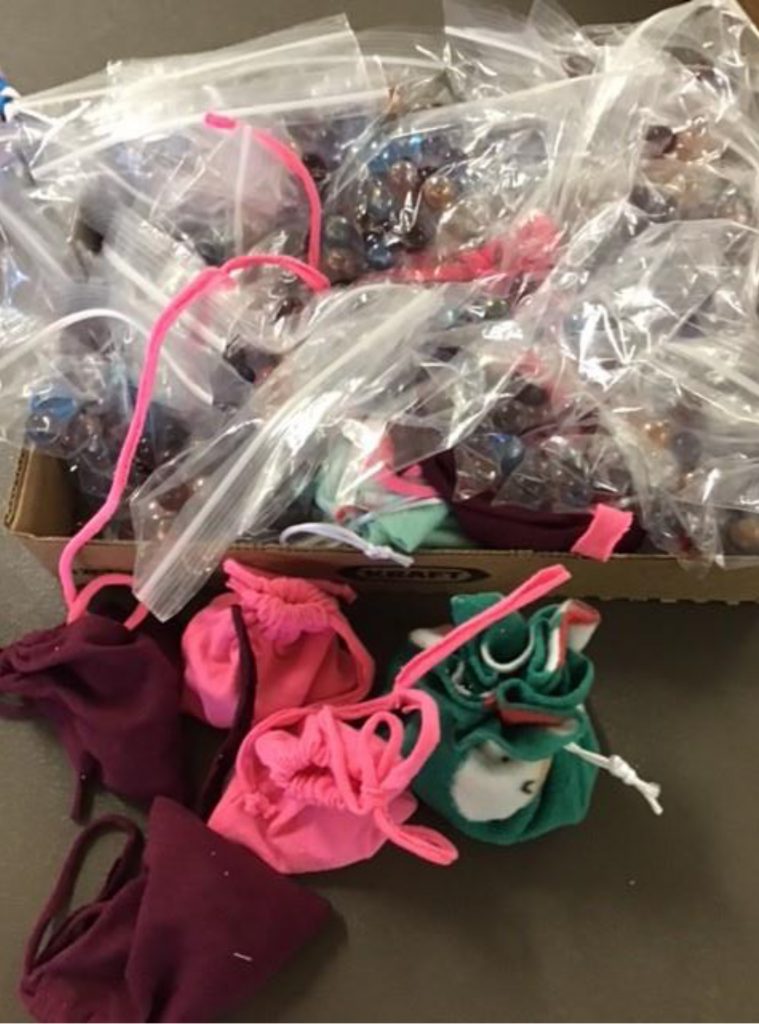 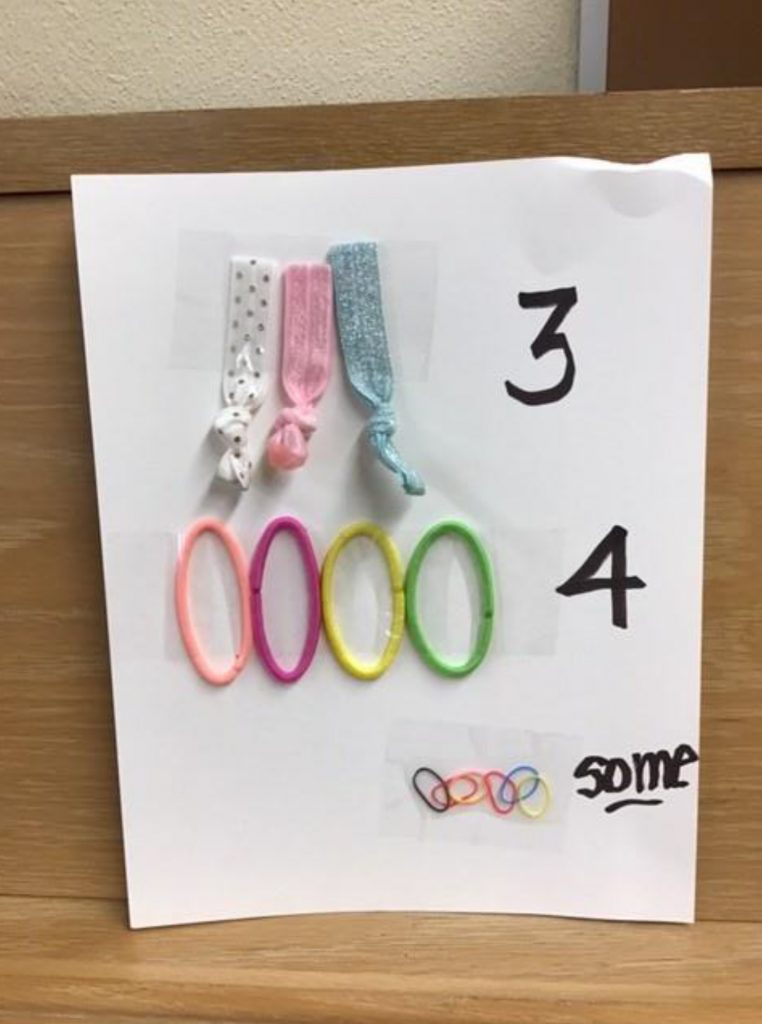 64 bags of hair ties and clips.

Your donations and participation made sure that our pre-packing was a great success! 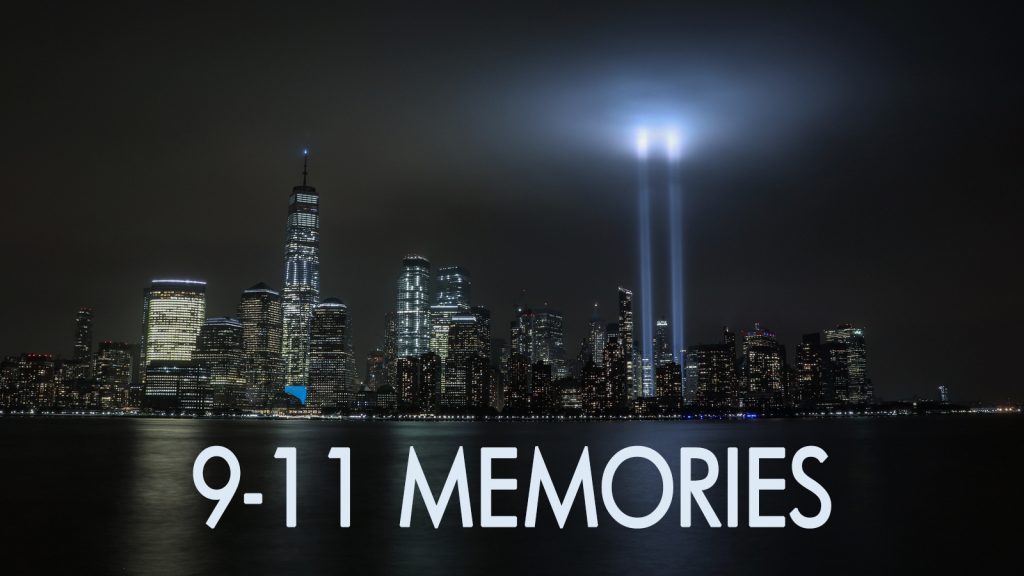 The morning of September 11 was a regular day—until it wasn’t. I was preparing for school and talking to a member of my carpool on the phone, when the tv news reported an airplane had flown into the World Trade Center. It was surreal.

One year later, I was in New York attending a conference. It was then that it all became very real for me. In Union Station, there were still many, many photos of people up with signs asking things like, “Have you seen my mom? She was last seen on the 32nd floor of the World Trade Center.” It was very sad. There were also shirts tied to the fences  with signs that said, “Never forget.”  Finally, our group visited the sight of the World Trade Center and saw a cross that was erected in the rubble. It was an event that I will never forget.

Saturday morning was very somber, silent and prayerful as I remembered vividly that morning and watching in horror as the events that day unfolded.  I remember feeling on 9-11, as the Sheriff, the worry of what was happening and what may happen.  The burden of all of a sudden planning for the what if, was daunting, given that 5 Foreign Nationals tried to board a plane in Cheyenne and were ultimately arrested in Utah.   Sunday we opted to attend the Sunday service at the traveling Vietnam wall.

We attended the Fire Department Remembrance Ceremony where one brother opened with the invocation and the other brother rang the bell. We also visited the Vietnam Wall display.  All was very moving and sad. Living through the Vietnam War was very scary for me and I worried about those that would be called to serve.

As we watched some of the many documentaries aired on television we relived that horrible day and and shed tears once again. We watched a video on YouTube called the “9-11 Sounds of Silence” by Steve A.  which was so incredibly powerful that it stunned us into silence and prayers for this nation and its future hoping that we never forget.

We watched the memorial service and the memories if loved ones on TV.

I watched the veterans parade, listened to the military band performance, watched the community theater “110 Stories”, and walked along the Viet Nam memorial wall.  It was an emotional and patriotic day.

We went to the Traveling Vietnam Memorial at the Camplex. They also had plaques for all the wars and a plaque for each of the planes that went down on 9-11 along with the names of all the people in the Twin Towers, the Pentagon, and on all of the planes who lost their lives.

On 9/11/2001 I was in Denver for some company meetings and training. I was waiting for the elevator to go up to our office which was on the 25th floor. Someone mentioned that a plane had flown into the World Trade Center tower.  Upon getting up to our office and getting to the training meeting we heard about the second one and at that time they mentioned something about possible terrorists.  Our meetings were canceled and the building was evacuated.

On 9/11/2021 I was playing in a golf tournament at Pine Haven and before starting the tournament we had a moment of silence, and then the national anthem was played.  It was a very somber time.

To start the day out on a positive note seems to make it a little easier to cross life’s hurdles along the way.

watching TV and told me to change the channel.  What a shock as the second plane had just hit.

What I remember about 9-11 is that there were no jet trails in the sky after all airlines were grounded.  It was a beautiful fall day with blue skies but no jet trails.  I chose to go to work…worked west of town in the Powder River Breaks…was a quiet, sunny day….I thought a lot that day about our country and God’s sovereignty.  I didn’t watch the news…thank goodness I didn’t have cable back then.  Only watched the towers burning and their collapse on a computer two weeks after it happened.

I remember turning on the news at 7:00 am as I was getting ready for work. I heard a plane had hit the twin towers so I turned on the tv and woke Doug. He thought it was an accident but I continued watching and saw the second plane deliberately fly into the building. The tears flooded from my eyes.  I went to work and told others in the office what had happened. We were glued to the tv all day and not much work was accomplished.  Two years before this event I stayed in a hotel at the base of the towers and it was extremely unsettling to see the events of that day and week.

I could not believe it.  I prayed for our country and the people that died and were injured.

I remember the images on TV of someone out on some type of ledge to escape flames in WTC #1; then jumping.

I remember the beautiful sky with no jet trails.

I remember waking up (on the west coast) to the news on the radio.  I snapped out of sleep in a hurry.  We pulled out our little tv and tuned in to the news.  Shock.  Silence.  We held our kids really close.  Visited with people from church on and off throughout the day.  There was a sense of uncertainty as to what might happen next in terms of further attacks.